Three images of John Brown being led to execution

I know next to nothing about art, but I love to analyze artwork that depicts a historical event.  Usually it says more about the time it was created than the actual period it represents. Recently I had the pleasure of spending an entire afternoon at the de Young Museum in San Francisco which is walking distance from my brother and sister-in-law’s place!

I was able to finally see this oil painting in the flesh: The Last Moments of John Brown by Thomas Hovenden.  It depicts anti-slavery martyr or domestic terrorist (depending on your perspective, I’ll give mine in a future post) John Brown being led to the gallows for his execution.  The online images don’t do certain aspects justice.  It’s harder to see how the dark row of brick, door frame and dark bit of the soldier’s belt form a symbolic cross behind the Brown but in person it really comes through! The Biblical imagery is strong, and even though the hanging-noose already being looped arround Brown’s neck–and his Christ-like kissing of the slave child–is likely apocryphal it makes for a really moving image to me.  This was painted around 1883, which is very telling.  This is nearly 25 years after John Brown’s attempt to spark a slave revolt at Harper’s ferry, and about 20 years after Lincoln’s Emancipation Proclamation.  Reconstruction was just finished and the process of the (white) South rolling back multi-racial representative democracy would just started getting its momentum.  The (white) North was also suffering from Reconstruction-fatigue so I can’t help but wonder if the artist was trying to remind and re-energize a populace that was increasingly becoming weary or indifferent to the plight of African-Americans.  By 1890 all the ex-Confederate states had successfully dismantled all of Reconstruction’s triumphs in practice if not in name.

Here is a painting from 1867 by Thomas Noble that also depicts John Brown being led by soldiers to his execution.  Note in this image he also blesses the slave infant being held up to him from his mother, although in this case it is with a laying of hands rather than a kiss.  Also notice the young white girl present in both representations. 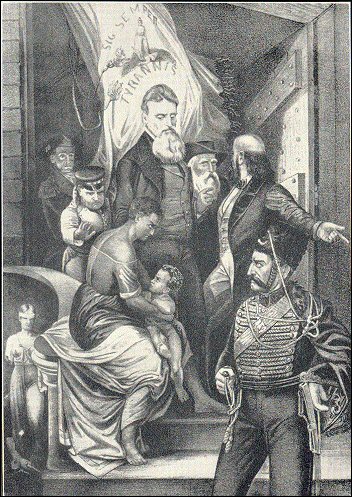 This is a Courier & Ives lithograph showing the same moment with John Brown and the slave child on the way to the gallows.  It is the oldest of the three (1863), done at the height of the War.  The young white girl does not appear in this one.