It looks like Pennsylvania’s controversial voter ID law will be in place during the 2012 election.  A judicial appeal was unsuccessful. This law is problematic for many reasons (not the least of which is the judge who made the ruling even admitted there is little-to-no evidence of in-person voter fraud in the state) and I have thrown around the 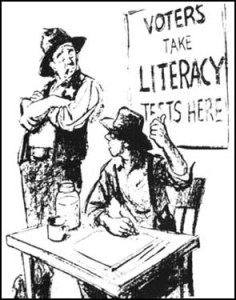 terms “Jim Crow”, “poll tax” “literacy tests” and the like repeatedly.  I’d like to think it’s my own hyper-sensitivity because I’ve spent the summer steeped in US Reconstruction and LBJ (yes, I’ve taken on the Caro book!) but you cannot deny that this reeks of political mischief.

Studies show that two groups are most likely to be affected by this: the very elderly (80+) and African-Americans.  Those who are crying foul point out that these are two groups who overwhelmingly vote Democratic and–not coincidentally–a Republican dominated state congress enacted this law despite no evidence of voter fraud in the state.  It is also before an election where Pennsylvania is likely to be a swing state where a win either way is by the most razor-thin of margins. Even 1% of the electorate being disenfranchised of their right to vote could make a difference (much less 9%!).  It is perhaps apropos that the challenge to the law is coming from 93 year old Viviette Applewhite: someone who has cast a ballot in every presidential election since her first when she voted for FDR.  Suddenly, according to the state of Pennsylvania, she is a suspicious fraud risk.

That said, the more I think about it the more I’ve come to the conclusion it is probably not motivated only by pure partisanship (or, worse yet, racism) although the end result of this law certainly is.  Rather, I think it is a symbol of how segmented and different our lives have become in terms of urban/rural divides as well as we-could-be-in-different-countries lifestyle/class divides. Those who support the law (and likely the GOP legislators who passed it) are probably think “what’s the problem? you must have an ID to do anything these days! Just go get one! Who the hell doesn’t have a driver’s license”.  The mainstay of Republican districts these days tend to be in the suburbs and exurbs: areas when a car is a necessity to even pick up a gallon of milk.  The concept of forgoing a car and using public transportation for them is completely foreign.  Again, urban dwellers who live that lifestyle are more likely to vote Democrat (for a variety of reasons).  However, most of them would still keep a state-issued ID for a variety of other reasons, not to mention a passport (studies also show urban Blue State dwellers have passports in high percentages).  So they too may likely scoff at the idea of someone without a license or passport.

Yet, someone in their 90s who let their license expire years ago?  Their whole life may revolve around 5 city blocks.  Social Security checks are auto-deposit.  While voting stations are required to be somewhat close and nearby, most DMV’s are in drive-to-only areas of urban sprawl.  This affects the poor, urban African-Americans, non-car owners, and the elderly disproportionately.  Sure, in theory you could catch a cab–on the certain days they are open, many in PA only issue IDs 2 days a week–wait, and then pay a small fee for a state-issued picture ID.  Yet this is placing an undo burden on certain segments of the population.  It’s a de-facto poll tax.  There should be no lifestyle requirement to cast a ballot: even if that is the predominant lifestyle in your state.

As a friend recently pointed out to me the USA in particular should want to avoid any reminders of the creative shenanigans that were employed to keep legal voters  from the ballot given our shameful history with poll taxes, literacy tests, and poll placements.  All things that were commonplace in Viviette Applewhite’s memory.

This entry was posted in Current Politics & Media. Bookmark the permalink.

One response to “Pennsylvania & Voter Suppression”