This month I finished reading two books about African-American Congressmen in the US Senate and House during the Reconstruction period. One, The Glorious Failure, was unexpected as I’d never heard of it and I only was barely aware of South Carolina Representative Robert Brown Elliott.  However, in the more recent Capitol Men Dray mentions author Peggy Lamson having done the most thorough research on Elliott’s mysterious past and childhood and I was intrigued.  Lamson’s book was long out of print but luckily for me, Seattle Public Library was able to get me a loaner that was at Evergreen State College in Olympia! 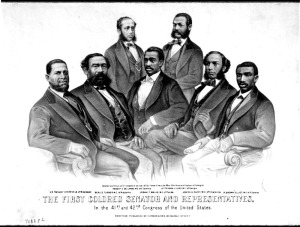 —Picture of the first African-Americans serving in the US Congress: 1869-1872. Robert Brown Elliott is on the far right.

Elliott claimed to be born in Boston, MA but no record of proof can be found of that.  He also claimed to have been educated primarily in the UK, including his law degree from Eaton.  Yet, no record can be found of that either although there is quite a bit of evidence of his time spent in Liverpool just prior to emigrating (or “returning”) to the US.  Lawson speculates that he may very well have been Liverpool-born (Liverpool had been the center of the UK slave trade and had a not insubstantial African descended population from that period) and hadn’t had his citizenship the required eight years to be a US member of the House of Representatives.  Thus, an invented a Boston birth, followed by years of education in the UK.  When campaigning and visiting Boston Elliott strangely never made reference to his childhood or places of significance there, he only spoke of his Boston childhood when in South Carolina. Some speculate that Elliott may have actually been South Carolina born and raised, but that seems less likely.  Yet, references to a British accent are curiously absent from contemporary reports as well. What’s interesting is that at the time of his service in Congress he was often referred to as the first “African” US congressman, as most of the other African-Americans serving were of mixed-race. What a strange postscript to history if the first “African” United State Congressman was actually a British subject.