Since there is a rather important even happening today that may be distracting me, I decided I would do a lighter post about a children’s illustrator that was a HUGE part of my childhood. I just accidentally stumbled across him when I was researching images of Topsy (from the Harriet Beecher Stowe book Uncle Tom’s Cabin) for another piece I want to do.  Not sure if that post is going to ever come to fruition or not: it involves Yoo-hoo, Mountain Dew, and the unlikely success of reality television’s Here Comes Honey Boo Boo. 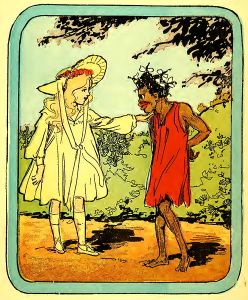 Anyway, in that process, I found this 1908 image and it’s pretty much the racist, caricatured image of Topsy common at the time. A whole book could be written on Topsy alone and her interesting Jim Crow evolution. Yet the illustration style overall (more Eva than Topsy) struck a nostalgic chord with me instantly. Then I put my finger on why! The illustrator is the creator of my childhood memories of the Oz books: John R. Neill! Of course he did other work besides the Oz books but I guess I just hadn’t realized it extended to older classics like Uncle Tom’s Cabin.  Honestly I don’t think I’d ever seen a bit of his work outside Baum’s books.

To me Oz will always be L. Frank Baum + John R. Neill (apologies to MGM, Judy Garland, and W.W. Denslow). So, just for the hell of it here are some illustrations—

Ozma and Dorothy seem quite close in this illustration from 1909

This picture (above) is from Tik-Tok of Oz (1914).  Can any science fiction historians confirm or deny if L. Frank Baum’s Tik-Tok is fiction’s first robot or not? I’ve heard he is, since he was 100% human-created and mechanical as opposed to Baum’s Tin Woodman from the first book (1900) who was a regular flesh and blood man who had become tin via magic and supernatural methods.

Another Neill picture of Ozma. Ozma’s age was always kind of ambiguous to me. She seems 16-17ish here?