I recently had a chat with a good friend of mine working on his PhD dissertation in English. He said he loathes meeting someone new and admitting that he is an English PhD student. The reason? He often gets a trite response like “oh I better mind my p’s and q’s” or “I better watch myself and not to use a double-negative”! He asked me if there were any parallel annoying one-liners to studying history and I’ve thought of one culprit:

A) This is a fundamental misunderstanding of what historians do. They don’t memorize dates and facts that are

unchanging gospel and then somehow finish the task. A PhD in History isn’t about learning 3 times or 4 times more “facts & dates” as a Bachelor’s degree in History. More it’s that they analyze what we think we already know about a period and try to say something new, uncharted, undiscovered about it. Or prove something we’ve thought all along has been a mistake. Or find a way something in the past got us into a current situation. Or reassess a group or people or event that’s been side-lined or maligned. You could write a historical thesis on American 1940s feminine hygiene product advertizing, for instance, and what it meant in relation to women in the workplace during WWII. Or follow-up with its implications vis-a-vis the push for traditional suburban life in the 1950s. Something from 50 years ago is no less historical than 500. You’ll never “run out” of historical research. Ever. There is no final word on the subject. Ever.

C) It’s kind of racist. Saying “the USA has no history” implies that only white people’s’ history is “real history”. People lived in the US and Canada and Mexico during the Thirty Years War and the Crusades. Just because they weren’t Caucasian and weren’t swinging around cool swords like in Spartacus: Blood & Sand doesn’t make it any less historical. 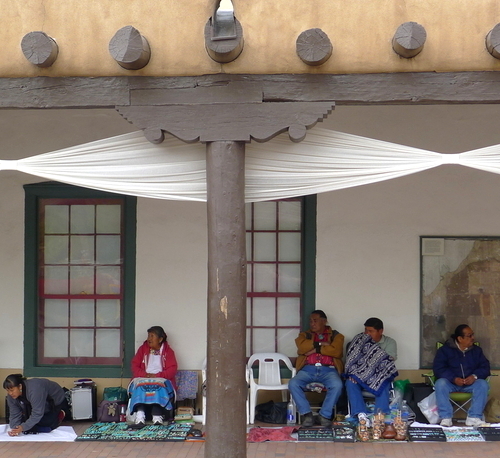 Modern view of New Mexicans selling jewelry at the (still in use) Palace of the Governors Building in Santa Fe, New Mexico. Built in 1610. To put in perspective that is about 100 years before London’s Buckingham Palace and nearly 250 years before the Irish Potato Famine.

2 responses to “A Trite One-Liner”

Leave a Reply to B. Alexander Cancel reply