How I learned to stop worrying and love the aPODment

My neighborhood of nearly a dozen years has recently been subject to much hand-wringing and much national attention for several cities allowing the development of high density housing. While I think the outward appearance of these building could benefit from a little creativity I have to say how amusing I find it that even one of the densest residential areas has trouble embracing an idea that is as American as apple pie.

I have long been a fan of 1930s American popular literature, many of which are out of favor today and probably would get the label of “middlebrow” at best. I heavily mined that same period and genre for my historical thesis of limited scope back in 2002-2004.  A central feature to these novels has always been the boarding house and the urban flat: dwellings for singles, salesmen, kept women, new immigrants, divorcees, spinsters and “confirmed bachelors“, and other colorful characters creating a new dynamic in a busy urban setting. One consequence of the post-war cult of the automobile and flight to the suburbs is, I believe, this concept faded from popular consciousness. When I think of early 20th century US I think of families living in New York apartments with high density, A Tree Grows In Brooklyn, a harried mother getting Mrs So-and-So Upstairs to watch the baby an hour while she runs to the store for something special. This was the era of strict demarcation between urban density and rural life–the American suburban standard that I feel a lot of us still carry with us as the “norm” (yard, garage, basement) hadn’t taken hold.

The aPODments may end up being the sort of transient housing the NIMBY activists fear.  Also, I really wish the developers would stop trying to defend themselves by claiming they are some sort of community activists set on creating affordable housing. If you compare a shared-full-kitchen 240ish square foot aPODment with a 490ish square foot studio the price comes out to less bang for your buck, not more. However, I think they have a valuable place in the urban core and Capitol Hill of all places–home of beautiful vintage early 20th century apartments–needs to accept them and fold them in as part of the local landscape. Many of the motel-style apartment homes built for the 1962 Seattle World’s Fair (that event that brought us the Space Needle) seemed just as jarringly out of place mingled among the 1920s terra cotta apartment buildings and brick Tudor-style flats. Yet fifty years later there is an Americana nostalgia to these constructions as well. Part of what appeals to me with city living is observing several layers of time on a 20 minute walk. So long as some historic building of note isn’t being demolished, I have no problem with aPODments filling in the gaps and empty lots in an already dense and vibrant neighborhood.

Fannie Hurst and Edna Ferber are two authors whose heyday would have been from about the First World War to the late 1930s. Their novels of immigrants, working-class girls, fallen women, and confirmed bachelors strongly feature the boarding house: 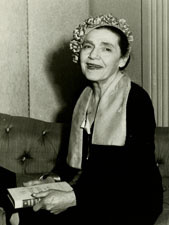 Fannie Hurst in the late 1950s, after her peak in popularity

hallways smelling of foods from different cultures. Washing hanging on iron radiators. Milk delivery doors and ice boxes.  All of these things exist at my current home. Granted, the immigrant neighbors down the hall are more likely to be Somalian or Vietnamese than Polish Jews or Italians, and we all use our 1922 ice boxes as cool built-in liquor cabinets now. The scents in the hallway might also be cannabis (it’s legal in Washington State) but the spirit and connectedness is the same.

I live in a 500 square foot studio apartment built when Warren G. Harding was president. It’s by far the smallest place I’ve ever lived, as a child I assumed the older you get and the more you pay the bigger your place will be! I think a lot of people still assume this. This weekend I am feeding the cats of two of my neighbors: a young couple with a toddler upstairs and a 30-yr old single professional down the hall. This week on two separate occasions I had friends over who live less than three blocks away to enjoy dinner and wine–cooking for one is never as fun as cooking for others. Today I helped another neighbor to hang a picture (and learn from my mistake RE: laff paster and making effective use of the oak picture rail). This is not the life I envisioned I would have at 40 (and yes, I made the early 2000s required detour to Real Estate Bubbleland of condos and granite countertops). Yet, part of the reason I think I am embracing it and loving it is because it is precisely the life a part of me always imagined for myself during my teen years. I just could never reconcile it with modernity. Fannie Hurst died in February of 1968, Ferber died less than two months later.  While neither would recognize many aspects of my modern life I am tickled that the urban lifestyle they so often chronicled–albeit with a modern twist–is more alive in Seattle today than when they died. 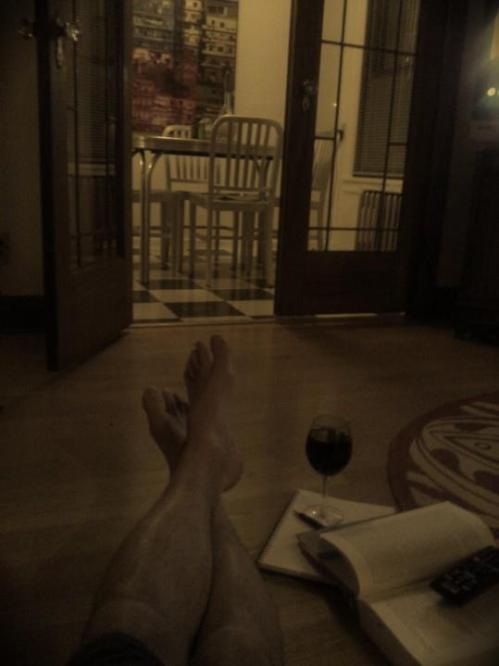 Relaxing in my apartment, 2013